Anti-money laundering (AML) software refers to a solution, which enables banks and other financial institutions to monitor customer behavior for suspected criminal financial activities through automated processes. Different types of AML solutions such as transaction monitoring, currency transaction reporting, customer identity management, and compliance management have been considered under anti-money laundering software market. Increase in the volume of global transactions has fueled the deployment of AML solutions in banks and other financial institutions. The global anti-money laundering (AML) software market size was valued at $879.0 million in 2017, and is projected to reach $2,717.0 million by 2025, registering a CAGR of 15.2% from 2018 to 2025. 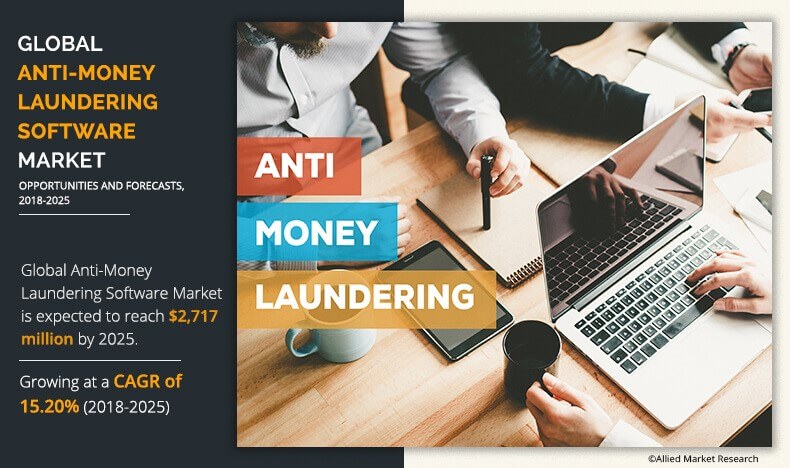 The customer identity management segment led the overall market in 2017 and is expected to maintain its dominance in the near future, owing to rise in cases of identity theft-based money laundering cases. 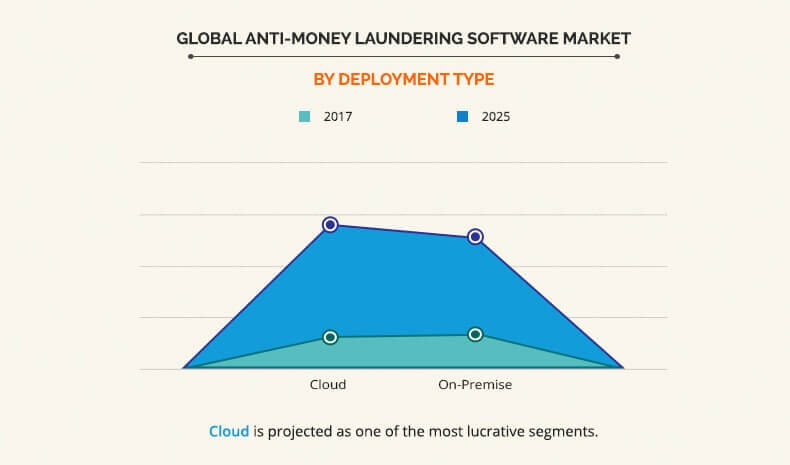 The on-premise-based AML solutions segment dominated the market in 2017, due to enhanced security offered by these systems. However, the cloud-based segment is expected to witness the highest growth rate, due to rise in adoption of cloud-based solutions in small- & medium-sized financial organizations to combat money laundering. 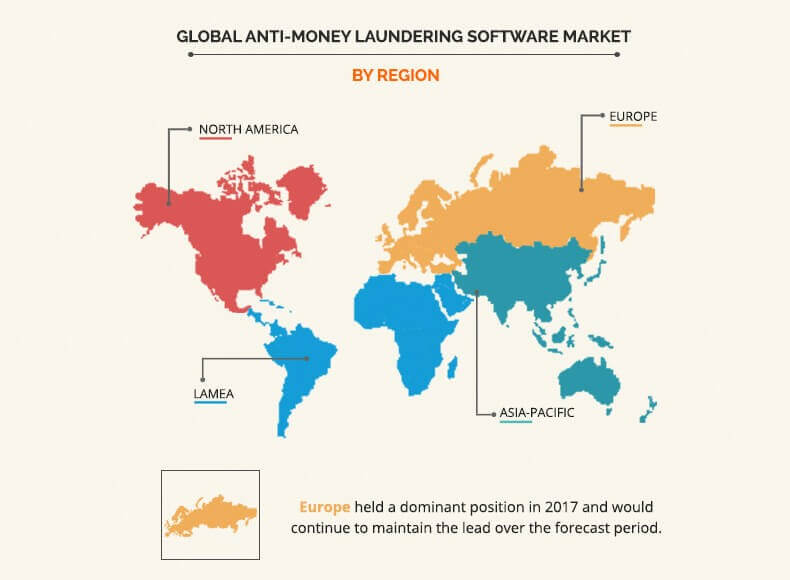 Europe governed the overall market in 2017, owing to high adoption of AML solutions and enforcement of stringent government regulations to deploy AML solutions in financial institutions across the region. However, Asia-Pacific is expected to witness the highest growth rate during the forecast period, owing to factors such as the rise in bank IT spending and increase in government initiatives toward money laundering.

The report focuses on drivers and restraints of the market based on the analysis of regional trends. Moreover, the study provides Porter’s five forces analysis of the industry to understand the impact of various factors such as bargaining power of suppliers, competitive intensity of competitors, threat of new entrants, threat of substitutes, and bargaining power of buyers on the growth of the AML software market.

The global anti-money laundering software market is segmented based on component, product, deployment type, and region. On the basis component, it is bifurcated into software and services. By product, it is divided into transaction monitoring, currency transaction reporting, customer identity management, and compliance management. Depending on deployment type, it is categorized into cloud and on-premise. Region wise, it is analyzed across North America, Europe, Asia-Pacific, and LAMEA.

The global anti-money laundering software market is influenced by numerous factors such as surge in money laundering cases, implementation of stringent government regulations to deploy AML solutions and an increase in IT spending among financial institutions. Moreover, dearth of AML skilled personnel is expected to impact the market growth during the forecast period. However, each factor has its definite impact on AML software market growth.

Rise in online banking institutions, peer-to-peer transfers using mobile phones, anonymous online payment services, and use of virtual currencies have led to increase in money laundering cases. Banks suffer a huge economic loss, owing to these money laundering fines. A total fine of more than $26 billion was imposed for non-compliance with AML, KTC, and sanction regulations in the last decade. Both developed as well as developing economies reported significant money laundering cases and respective fines, owing to their well-established finance industry. For instance, recently, Danske Bank announced that between 2007 and 2015, about $235 billion transactions flowing through its Estonian branch were found to be associated with money laundering. According to anti-money laundering experts, a penalty of $8.3 billion might be imposed on Danske Bank. Similar cases have been recorded in recent years, wherein banks had to pay a huge fine for money laundering. These high amount of losses incurred are motivating financial institutions to adhere to regulatory requirements, which fuel the adoption of AML solutions, thereby boosting the growth of the market.

Growth in IT expenditure among banks

Increase in IT expenditure has motivated companies to adopt advanced technologies and solutions. Rise in need for improved compliance capabilities within financial institutions to address complex regulatory and business environment fuels the AML software market growth. Banks are significantly investing in technologies to enhance and secure their infrastructure. For instance, Citigroup is expected to invest around $8.0 billion on technologies in 2018, which is more than 20% of the bank’s expense budget. Moreover, according to a survey conducted by RSM Consulting, more than one-third banks announced an increase in their spending on anti-money laundering programs in 2017. In addition, 44% of banks reported an increase of 5–10% in their AML and BSA budgets, and the others expected growth of 11–20% in their spending. This rise in technological budgets acts as a major driver of the AML software market.

The anti-money laundering software market is consolidated with the presence of key vendors constituting large market share. Europe and North America are the prime consumers of these systems. However, Asia-Pacific is expected to experience robust growth in the near future, owing to rise in AML spending among banks and implementation of stringent government regulations to deploy these solutions in emerging markets such as China, Australia, India, and Singapore. Some of the key players profiled in the report include ACI Worldwide, Inc., Ascent Technology Consulting, Eastnets Holding Ltd., FICO TONBELLER, NICE Actimize, Regulatory DataCorp, Inc., Safe Banking Systems LLC, SAS Institute Inc., Thomson Reuters Corporation, Truth Technologies, Inc., and Verafin Inc. These players have adopted various strategies to increase their market penetration and strengthen their position in the industry. For instance, Fico entered into a partnership with Matrix International Financial Service (IFS) in 2017 to provide FICO TONBELLER Siron Anti-Financial Crime Solutions to address money laundering, tax evasion, know your customer (KYC), and other compliances.

Q1. What will be the Anti-Money Laundering Software Market value expected during the forecast period?

A. The Anti-money laundering software market value expected to reach $2,717.0 million by 2025

A. The major factor that drives the Anti-money laundering software market such as Rise in money laundering cases, Stringent government regulations & Growth in IT expenditure among banks

Q3. How can I get report sample of Anti-Money Laundering Software Market?

A. To get updated version of Anti-money laundering software market report

Q4. What is the market CAGR of Anti-Money Laundering Software Market by 2025?

Q5. What was the market value of Anti-Money Laundering Software industry in 2017?

A. The global anti-money laundering (AML) software market size was valued at $879.0 million in 2017

Q6. How can I get top ten players company profiles of Anti-Money Laundering Software Market?

A. On the basis of top growing big corporation we select top 10 players.

A. The global anti-money laundering software market was led by the customer identity management segment in 2017, and is projected to maintain its dominance during the forecast period.

A. The global market was dominated by Europe, and is expected to maintain this trend during the forecast period.

Q9. What are the Opportunities of Data Center Cooling industry ?

A. Emergence of artificial intelligence in AML solutions & Increased market for cloud-based AML solutions are the major opportunities in this market

Q10. Which are the key market players in Anti-Money Laundering Software during forecast period?