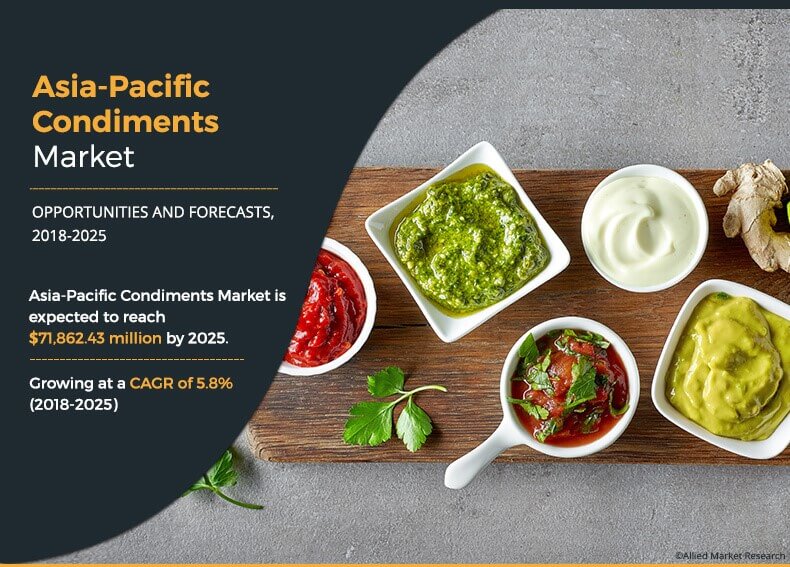 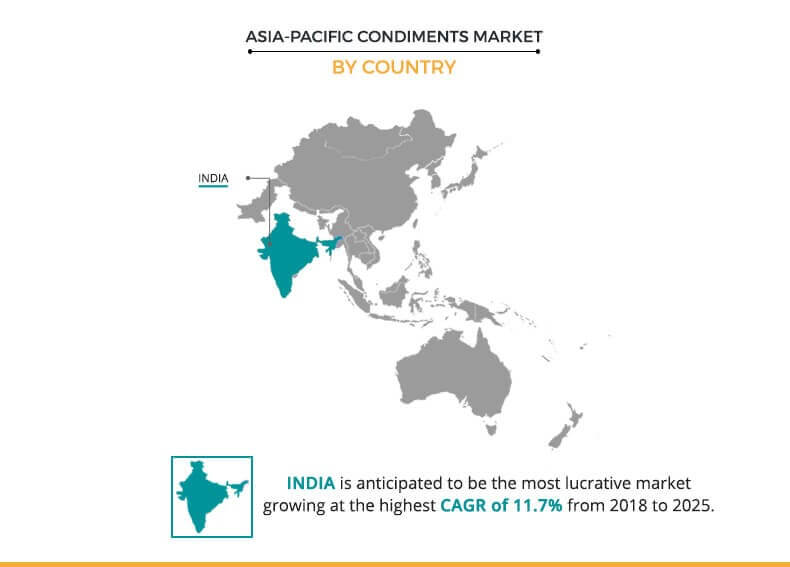 In 2017, Japan accounted for the highest market share in the Asia-Pacific condiments market and is projected to witness high revenue growth from 2018 to 2025, owing to growth in affluence and rise in fast food outlets as well as high consumption of meat in the region. In 2017, the total consumption of poultry meat in Japan was 2,044.05 kilotons compared to 2,020.20 kilotons in 2016. The meat consumption was dominant, which drives the sales of condiments in the market. India is also anticipated to be a lucrative market for condiments owing to highest growth rate in the Asia-Pacific condiments market. This growth is attributed to the rise in consumption of the convenience food and meat & seafood products in the country. People tend to adopt convenient food options, such as fast foods and ready to eat meals, owing to changes in lifestyle of people owing to busy lifestyle and rise in disposable income. This change in consumption pattern is expected to drive the growth of condiments in Asia-Pacific. Fast food, which is the majorly consumed by consumers contains condiments such as sauce. 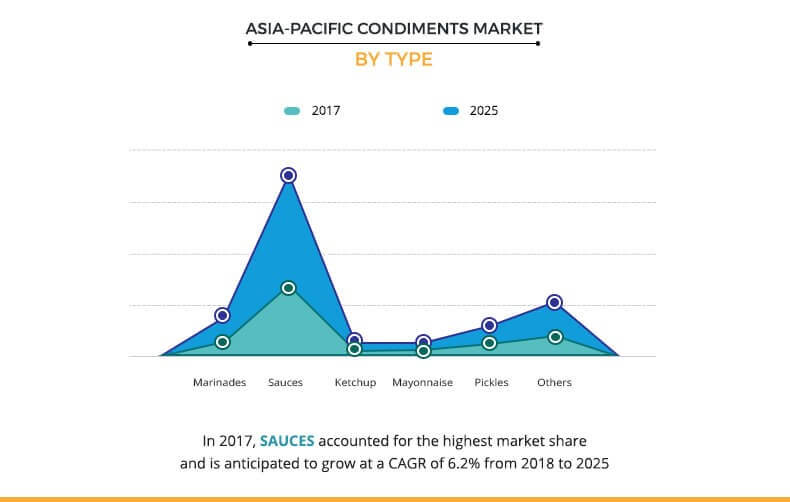 In 2017, the sauce segment accounted for the highest market share in the Asia-Pacific condiments market in terms of value as well as volume as it is the most common condiment consumed in the quick service restaurants and homes in most countries in this region. Sauce is one of the important components in many cuisines cooked across the world. Some of the most common dishes in which sauces are added include Noodles, Shushi, Dumplings, Onigiri, Ramen, and more. Sauce is also popularly used in pizzas, burgers, chicken wings, burritos, and more. A rise in the number of fast food outlets and quick service restaurants throughout the world has increased the demand for sauces, driving the sauces segment in Asia-Pacific condiment market. 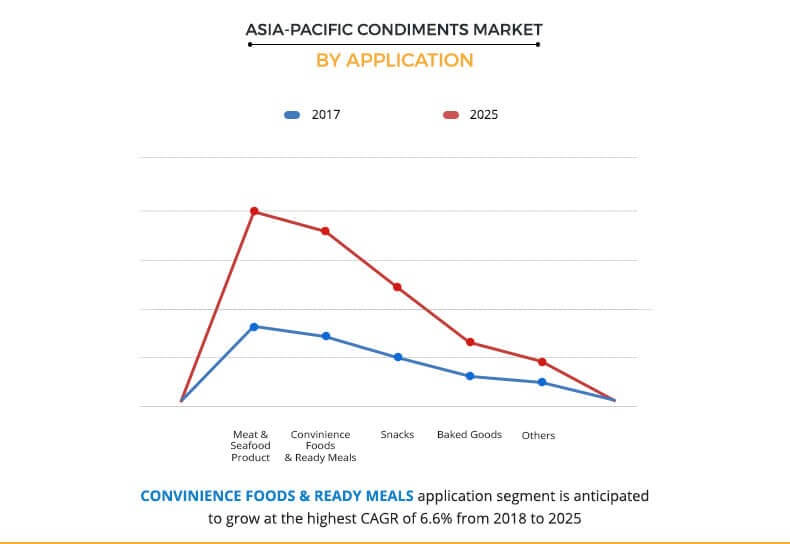 In 2017, meat & seafood was the prominent segment that accounted for the highest share in the Asia-Pacific condiments market. The meat & seafood segment is expected to grow at a 5.3% CAGR during the forecast period, owing to increase in demand for convenient food and meat products as well as rise in the number fast food outlets in the Asia-Pacific region. Popular Asian dishes such as Dumplings, Asian style (BBQ) Barbeque Chicken, Khao Suey, Chilly Chicken, Prawn Tempura, and Shushi requires condiments to enhance characteristics such as taste, color, and aroma; hence, driving the sales of condiments.

Sauces have been gaining popularity in the Asia-Pacific region as they are served with certain meals such as pizza, noodles, and meat & sea foods as taste enhancers. They are also an important component in many cuisines cooked across the world. Consumers with busy lifestyles look for quick and easy meal solutions that are wholesome. This factor of easy availability coupled with the increase in number of fast food outlets has increased the demand for fast food and ready to eat meals, which in turn supports the growth of the condiments market as condiments are an important part of these meals. Moreover, factors, such as increased income level paired with demand for a more diversified diet, have encouraged consumers to spend more on meat and seafood products. This boosts the sales of the condiments in the Asia-Pacific region. However, fluctuation in cost of raw materials is expected to hamper the growth of the Asia-Pacific condiments market during the forecast period.