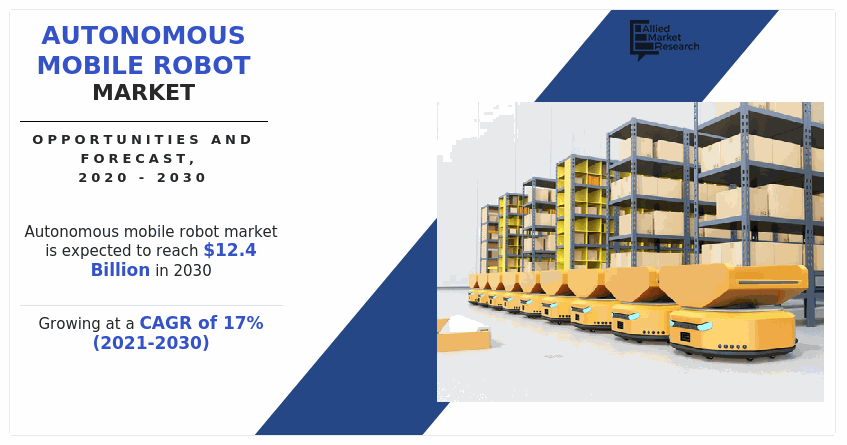 The autonomous mobile robot market is segmented into Application, End User and Type.

Autonomous robots are intelligent machines that can accomplish tasks in real-life without intentional human control. Autonomous mobile robots (AMRs) can understand and navigate their surroundings without the direct supervision of a person. An autonomous mobile robot navigates using maps created on-site by its software or pre-loaded facility drawings; this capacity can be equated to a car equipped with a pre-loaded set of maps. In addition, an autonomous mobile robot identifies the optimum path between waypoints using technology such as LiDAR sensors and simultaneous localization & mapping (SLAM).

Warehouse Fleet Management is projected as the most lucrative segments

On the contrary, the emergence of Industry 4.0 in logistics & warehousing and the rising E-commerce industry in favor of the market are projected to create new growth opportunities for prominent players. For instance, in January 2022, Boston Dynamics entered into collaboration with DHL Supply Chain. Under this collaboration, the companies signed a multi-year agreement that begins with equipping DHL facilities with Stretch, Boston Dynamics’ newest robot specifically designed to automate the unloading process in distribution centers.

Moreover, in the healthcare industry, mobile robots are revolutionizing surgery, speeding supply delivery & disinfection, and allowing physicians to focus on connecting with and treating patients. Also, hospitals usually depend on autonomous mobile robots to help with important needs such as telepresence, disinfection, and pharmaceutical & medical supply delivery, establishing safe settings while allowing staff to spend more time with patients. For instance, in April 2020, Delhi-based All India Institute of Medical Sciences (AIIMS) hospital deployed Milagrow iMap 9, a floor disinfecting robot that can navigate and sanitize the floors without any human intervention in COVID-19 wards.

Many manufacturing industries have started adopting autonomous mobile robots to build smart factories and improve productivity as they do not require permanent wire strips or magnetic tracks along the floor to guide their course. In addition, autonomous mobile robots navigate using light detection and ranging (LIDAR) technology, as well as on-board intelligence and collision-detection safety systems, which allow for the actual selection of the most suitable route to any destination area during any predetermined hour. For instance, in February 2022, LED display manufacturing giant Unilumin entered into collaboration with Geekplus Technology Co., Ltd and PANGQI Technology. Under this collaboration, Geekplus Technologies' autonomous mobile robots is anticipated to power the LED industry's first fully automated smart factory, where the entire supply chain process will be powered by Geekplus Technologies' autonomous mobile robots, from raw material receiving, quality inspection, warehousing, discharging, production, to finished product warehousing and distribution (AMRs).

Manufacturing is projected as the most lucrative segments

Autonomous mobile robots are integrated with sensors and cameras, as well as sophisticated software, to make them assess their surroundings and follow the most efficient path to their destination, safely avoiding people and objects, eliminating the need to build or alter costly auxiliary sensing facilities. These features help to improve its efficiency and productivity as compared to automated solutions and automated guided vehicles (AGVs). Developments in sensors and capabilities by manufacturers improve the efficiency and productivity of autonomous mobile robots, which fuels the growth of the autonomous mobile robot market. For instance, in March 2020, MHS Global expanded its portfolio of autonomous mobile robot (AMR) capabilities. MHS products provide access to a full lineup of automated mobile transportation systems, including modifications for target applications such as detachable carts, robotic arms, forklifts, and conveyor supplements.

Moreover, autonomous mobile robots (AMR) are being used in a variety of intra-logistics tasks, including manufacturing, warehouses, terminals, hospitals, and cross-dock. Their superior technology and control software allows them to operate autonomously in dynamic conditions. In contrast to an automated guided vehicle system, in which a central unit controls dispatching, routing, and scheduling decisions for all automated guided vehicles (AGVs), AMRs can communicate independently with other resources such as systems and machines, allowing the decision-making process to be decentralized. Owing to this, many organizations adopted autonomous mobile robots to improve the productivity and efficiency of their facilities. For instance, in January 2022, DHL Supply Chain entered into collaboration with Boston Dynamics. Under this collaboration, companies signed a multi-year agreement that begins with equipping DHL facilities with Stretch, Boston Dynamics’ newest robot specifically designed to automate the unloading process in distribution centers to enhance productivity.

Furthermore, industries frequently use AMRs to aid with inventory locating, picking, and shifting in order to free up employees to focus on high-value activities such as customer care. These help to overcome challenges such as real-time fluctuations in demand & labor shortage and offer fleet performance data for productivity improvement. When productivity is critical, many firms resort to low-powered AMRs that use less energy to operate. As AMRs require less power to operate, they can recharge and return to work faster, decreasing downtime and allowing production & fulfillment to continue. Such factors are expected to drive the adoption of autonomous mobile robots market during the forecast period.

Furthermore, an autonomous mobile robot setup necessitates the construction of waypoints and missions. In addition, the installation of autonomous robots in a factory or workplace to work autonomously is a difficult procedure. This may result in hidden setup costs, such as the cost of employing a vendor or robotics to configure the robot, time lost in modifying or adapting the building, hours spent generating and editing maps, and time spent teaching personnel how to set up & use the robots.

Moreover, the complexities involved in managing the value chain due to the low profits associated with the installation of such expensive systems and the surge in prices of micro-processing components are anticipated to hinder the growth of the autonomous mobile robots market during the forecast period.

Unmanned aerial vehicles is projected as the most lucrative segments

The emergence of industry 4.0 in logistics and warehousing

Industry 4.0 is a new phase of the industrial revolution that emphasizes machine learning, interconnectedness, real-time data, and automation. In addition, Industrial 4.0 is causing a wave of disruption in both company models and the supply chains that sustain them. These large changes will certainly have an impact on logistics, which is a critical component of these operations. Industry 4.0 is distinguished by its speed, scale, and breadth. The changes are so dramatic that they will revolutionize the way humans live, perform, and interact with one another, affecting industries, governments, businesses, and civilization as a whole. As a result, in order to remain competitive, the logistics system of the upcoming year strives for integrated information and effective resources and time, with major investment in innovation and the development of autonomous systems. Industry 4.0 technologies aid in logistics by optimizing transport routes, making maximum use of storage capacity, and planning. This factor is expected to fuel the adoption of autonomous mobile robots in near future. For instance, in December 2021, Bechtle, one of Europe’s most well-known IT service providers set a goal to boost its e-commerce business by 250%, which required handling approximately two times as many packages. To meet this high demand and to transform logistic services with Industry 4.0., Bechtle decided to deploy autonomous mobile robots in its warehouse to transform supply chain operations.

In addition, the goal of Industry 4.0 is to employ technologies to optimize the core processes that occur in logistics and warehouse operations, such as pick & place, stock management, and loading & unloading. Such operations are efficiently carried out by autonomous mobile robots with artificial intelligence (AI). Autonomous mobile robots can communicate with systems or other robots individually about their working status, transfer shipments throughout distribution centers, transport parts to manufacturing assembly lines, and deliver parts to manufacturing assembly lines without human interference. These features are expected to boost the autonomous mobile robot market with emerging industry 4.0 in logistics and warehousing.

Moreover, prominent players that operate in the autonomous mobile robot industry are anticipated to incline toward investment in the setup production lines and new facilities to achieve uniform coverage across the globe. For instance, in January 2021, MHS Global expanded its autonomous mobile robotics business through investing $7.6 million to open new facility in Bowling Green, Kentucky. In addition, in February 2021, Boston Dynamics expanded product line for its agile mobile robot Spot. The new products include a self-charging Enterprise Spot, web-based remote operations software, Scout, and the Spot Arm.

Furthermore, numerous developments have been carried out by key players that operate in the industry, which are anticipated to create remunerative opportunities for expansion of the market during the forecast period. For instance, in April 2020, Conveyco Technologies entered into partnership with Exotec AMR for combining autonomous mobile robots (AMRs) with a high-density automated storage and retrieval system (AS/RS).

Q1. What is the estimated industry size of autonomous mobile robot?

Q2. What are the upcoming trends of autonomous mobile robot market in the world?

A. Rise in demand for autonomous mobile robots across developing nations

Q3. What is the leading application of autonomous mobile robot market?

A. Pick and Place is the leading application of Autonomous Mobile Robot Market

Q4. Which is the largest regional market for autonomous mobile robot?

Q5. Which are the top companies to hold the market share in autonomous mobile robot?