Get detailed COVID-19 impact analysis on the Craft Beer Market

Over the past couple of years, there has been a rise in demand for various traditional beers, which includes craft beer as well. Craft beer is one of the main types of beer which is processed with a traditional or non-mechanized procedure by small breweries. The American Brewer Association (ABA) defines craft brewery as ‘small’, ‘independent’ and ‘traditional’. The Annual production of 6 million barrels of beer or less, refers to small craft brewery. Whereas in independent craft brewery, less than 25% of craft brewery is owned and controlled by a beverage alcohol industry member. 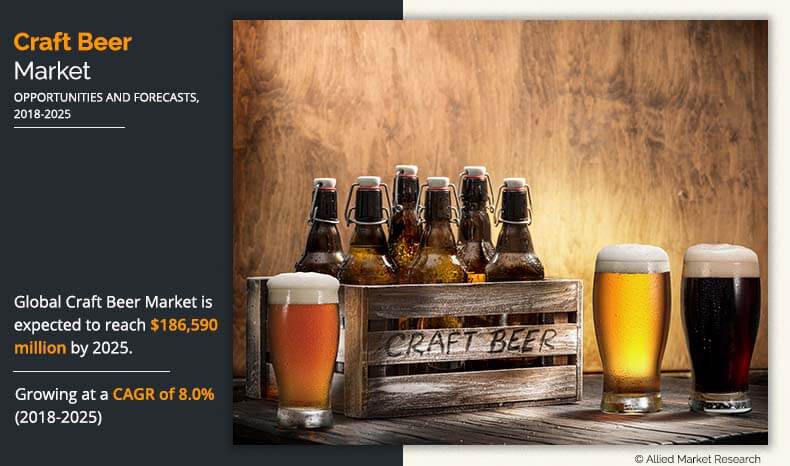 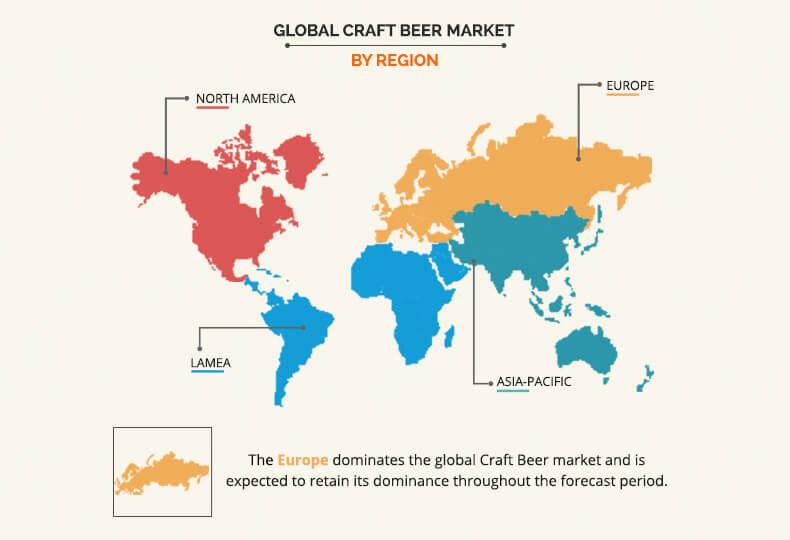 Beer in general has been the subject of many government regulations. Regulations serve several objectives such as enhancing government revenues through beer taxes, protecting consumer health, protecting society from alcohol abuse, reducing the price of bread grains, and constraining market power. Similarly, with the surge in demand for craft beers, governments have endured two-way interaction with rules and regulation. On one hand, regulations have stimulated, or constrained craft brewing compared to microbrewers. On the other hand, the growth of craft brewing has induced changes in regulations that have facilitated the subsequent entry of craft breweries. 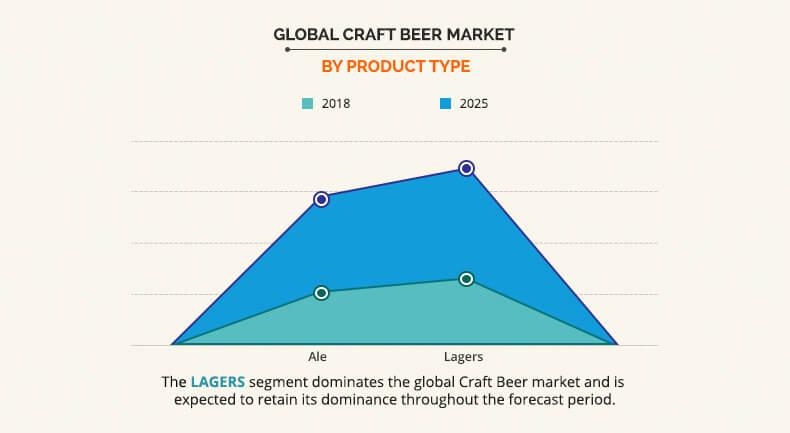 The global craft beer market is segmented on the basis of product type, distribution channel, age group, and region. By product type, it is divided into ale and lager. According to distribution channel, it is bifurcated into on-trade and off-trade. As per age group, it is divided into 21–35 Year Old, 40–54 Year Old, and above 55 Years old. Region-wise, it is analyzed across North America, Europe, Asia-Pacific, and LAMEA.

By product type, it is segmented into Ale and Lagers. Among these product types, ale accounted for a higher craft beer market share. The ale segment is further segmented into pale ale, brown ale, Scottish-style ale, porters, and stouts. Over the years, most of the beer consuming customers have developed a special preference for traditional beers such as pale ale, porters, and stout. This consumer perception has driven some of the key players in the global beer market to reinstate different types of traditional beers into the market. For instance, in 2019, Heineken launched a new line of craft beer for the UK market. 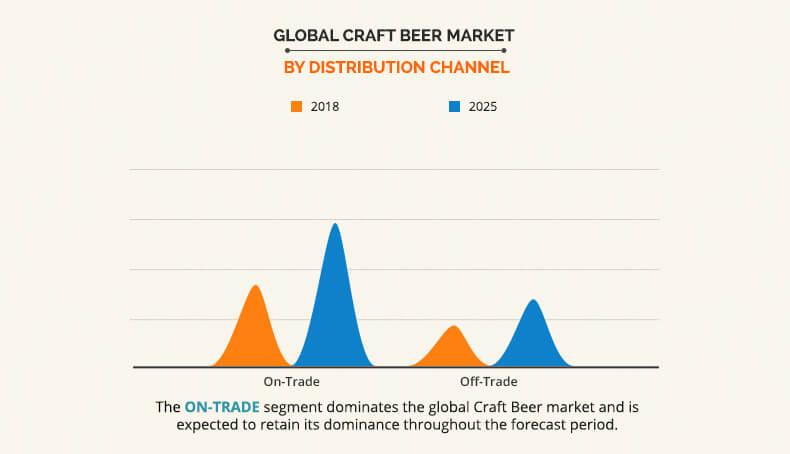 By distribution channel, it is bifurcated into on-trade and off-trade. The on-trade segment accounted for a higher market craft beer market share. The on-trade distribution segment includes outlets such as bars, restaurants, coffee shops, clubs, and hotels. The distribution and sales of products in the on-trade market differs completely from the approach and practice used in the off-trade market. In the on-trade segment, bar/restaurant owner/manager and the professionals working at any of trade outlet (bartenders and waiters) play an important role in the sales process. Consumers seek more comfortable and stylish experience in case of on-trade premises that include brewpubs, tasting rooms, and tiki bars. This factor drives the increase in the pub and bar culture among millennials. This, in turn, fosters the craft beer market growth.

By age group, it is divided into 21–35 year old, 40–54 year old, and 55 year and above. The people in the age group 21–35 years are referred to as millennials. They have been influential in the evolution of various industries, in terms of product offerings and services. When it comes to global craft beer market, millennials have been the prime customers. The craft beer brewers have been continuously strategizing on evolving its product offerings that cater to varying perception and preference of the millennial segment. Thus, rise in number of millennials is anticipated to provide lucrative opportunities for the global craft beer market forecast. 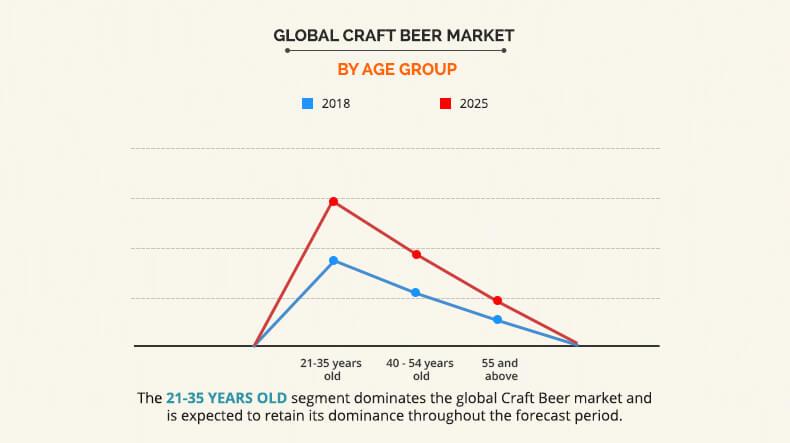 Region-wise, Europe dominates the craft beer market. The region has witnessed surge in the consumption rate for different type of craft beers. Due to rise in demand for these kinds of beers, Europe comprises both regional as well as international players that play a pivotal role in the growth of the craft beer market size, in terms of value.

According to the CXOs of prominent companies, increase in inclination of people toward traditional beer drives the global craft beer market, in terms of value.

There is an increase in the trend of mild beer consumption, owing to its low alcohol, calorie content, and health consciousness. Craft beer, a handcrafted beer that is infused with native flavors, is widely preferred by consumers and microbreweries. Change in lifestyles of consumers fosters the growth of the premium market. Consumers have increasingly opted for premium beers, which are expensive and have refined flavors to maintain their social status. Brewing companies need to address the rapidly changing demands of consumers to gain a stronger foothold in the market.

Mergers and acquisitions are the key strategies followed by the market players to sustain the intense competition in the industry, as in-house capacity building is believed to be difficult for novice players in the market.
Furthermore, several key operators in the industry consider online platform as one of the effective tools to promote and sell its products to the target customers due to surge in internet penetration. As per the sources, in 2018, there were around 4 billion internet users which was up by 7% compared to 2017.

Q1. What would be forecast period in the market report?

Q3. Does the Craft Beer company is profiled in the report?

Q4. Which are the top companies hold the market share in Craft Beer market?

Q5. How the  segments growing in Craft Beer market report?

A. Ale segments of the report is expected to growth at a healthy CAGR during the forecast period

Q6. Which is the most influencing segment growing in the Craft Beer market report?

A. 21–35 Years age group segment is the most influencing segments of Craft Beer market

Q7. Which are the key markets trending in the Craft Beer market?

Q8. Which market holds the maximum market share of the Craft Beer market?