Get detailed COVID-19 impact analysis on the Display Market

Display includes screens that project information such as images, videos, and texts. These display screens utilize numerous technologies such as light-emitting diode (LED), liquid crystal display (LCD), organic light emitting diode (OLED), and others. Also, it is majorly used in consumer electronic devices such as TV, laptops, tablets, laptops, smart watches, and others. The emergence of advanced technologies offers enhanced visualizations in several industry verticals, which include consumer electronics, retail, sports & entertainment, transportation, and others. The 3D displays are in trend in consumer electronics and entertainment sector. Also, flexible display technologies witness popularity at a high pace. In addition, the display technologies such as organic light-emitting diode (OLED) have gained increased importance in products such as televisions, smart wearables, smartphones, and other devices. Moreover, smartphone manufacturers plan to incorporate flexible OLED displays to attract the consumers. Furthermore, the market is also in the process of producing energy saving devices, primarily in the wearable devices.

Developments in flexible display, increase in demand for OLED display devices, and rise in trend of touch-based devices drive the growth of the global display market. However, high cost of the latest display technologies such as transparent display and quantum dot displays, and stagnant growth of desktop PCs, notebook, and tablets hinder the market growth. Furthermore, upcoming applications in the flexible display devices is expected to create lucrative growth opportunities for the global display market. 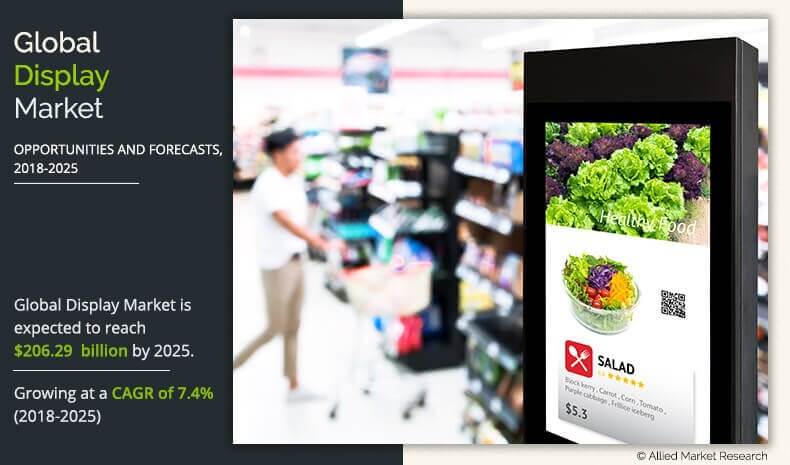 The market is segmented into display type, technology, application, industry vertical, and region. Based on display type, the market is divided into flat panel display, flexible panel display, and transparent panel display. Based on technology, it is classified into OLED, quantum dots, LED, electronic paper, LCD, and others. By application, it is categorized into smartphone & tablet, smart wearables, television & digital signage, PC & laptop, vehicle display, and others. By industry vertical, the market is divided into healthcare, consumer electronics, retail, BFSI, military & defense, transportation, and others.

Based on region, the display industry is sub-segmented into North America, Europe, Asia-Pacific, and LAMEA. 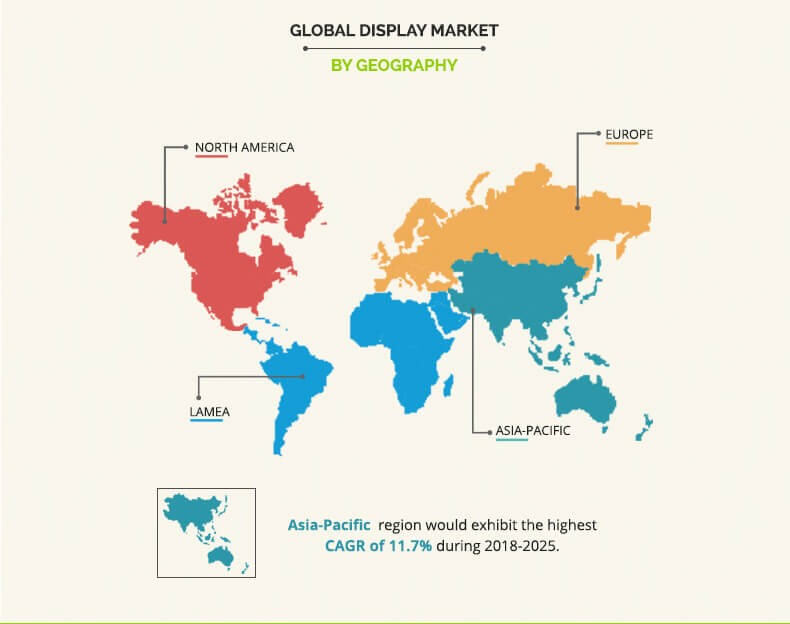 The significant impacting factors in the global display industry include high demand for flexible display technology in consumer electronics devices, increase in adoption of electronic components in the automotive sector, rise in trend of touch-based devices, high cost of the transparent and quantum dot display technologies, stagnant growth of desktop PCs, notebook, and tablets, surge in adoption of AR/VR devices, and commercialization of autonomous vehicles. Each of these factors is anticipated to have a definite impact on the display market during the forecast period.

The flexible display technology offers numerous advantages such as light weight, flexible nature, bright, consumes low power, and being shatter-proof, over the rigid traditional displays which are relatively heavier. These displays are used in several consumer electronics devices. Rise in demand for consumer electronics mainly smartphones, televisions, smart wearable devices, computers, and other display devices propel the growth of the display market.

Increase in Adoption of Electronic Components in the Automotive Sector

Display devices nowadays have also been integrated in the automotive industry. For instance, looking at this opportunity, LG display announced to start the production of a head-up display system for the automotive industry. The vehicle display device produced by LG is a transparent flexible display, which can be rolled around. The heads-up display can be utilized in several ways and has different functions for an enhanced driving experience.

Rise in Trend of Touch-based Devices

In recent years, the number of devices having touch sensors has increased exponentially as touch-based devices are easier to access. The touch-based devices require a display panel to operate, which in turn helps in the growth of the display devices. Therefore, a wide range of devices in the home appliances category, such as refrigerator, microwave, washing machine, chimneys, and others, are incorporated with displays with touch sensors. In addition, the automobile industry has witnessed rise in providing sophisticated display devices in the vehicle, such as the navigation system, digital dashboard, digital rearview mirrors, heads-up display, and others. Moreover, use of digital signage and touch-based displays in commercial buildings such as malls, theaters, entertainment hubs, and others have increased due to the complex and large architecture of these structures. These displays are incorporated with touch sensors, which the user can use for navigating and extracting other information. Hence, the trend of touch-based devices drives the growth of the display market.

In recent years, the growth of display devices such as PC monitors, notebooks, and tablets has become stagnant. Also, the demand for these devices is expected to be stagnant or low. The use of smart phone devices has increased due to easy functionality and relative convenience, which is similar to notebooks, tablets, and PC monitors. As a result, the demand for display devices exhibit stagnant growth. Thus, stagnant progress of display devices such as PC monitors, notebook, and tablets, is anticipated to restrict the growth of the global display market.

Great Adoption of AR/VR Devices and Commercialization of Autonomous Vehicles

The display market possesses high potential for the semiconductor industry. In the current business scenario, the demand for displays, particularly in the developing regions, witnesses a significant increase, owing to rise in trend of touch-based devices and increase in adoption of electronic components in the automotive sector. Thus, companies operating in display industry adopt various innovative techniques to provide customers with advanced and innovative product offerings.

High demand for flexible display technology in the consumer electronics device market drives the growth of the global display market. However, high cost of the transparent and quantum dot display technology and stagnant growth of desktop PCs, notebook, and tablets impede the growth. In the near future, adoption of the AR/VR devices and commercialization of autonomous vehicles are the factors expected to create lucrative opportunities for the key players operating in the display market.

The global display market was valued at $115.60 billion in 2017 and is projected to reach $206.29 billion by 2025, growing at a CAGR of 7.4% from 2018 to 2025. Among the analyzed geographical regions, North America is expected to account for the highest revenue in the global market throughout the forecast period (2018–2025). However, Asia-Pacific is expected to grow at a higher growth rate, predicting a lucrative growth opportunity for the global display market.