The outbreak of the COVID-19 pandemic had a negative impact on emulsifiers market. The emulsifier production and processing have declined, due to disruption in the distribution channel causing difficulties in obtaining production inputs such as plant & animal raw materials from which emulsifiers are extracted. Other challenges were seasonal such as border-crossing restrictions and limited access to professional services and labor. As a result of these concerns, there was a drop in raw material supply and processing capacity, which led to worsening of sales conditions, thus delaying the production and market activities. 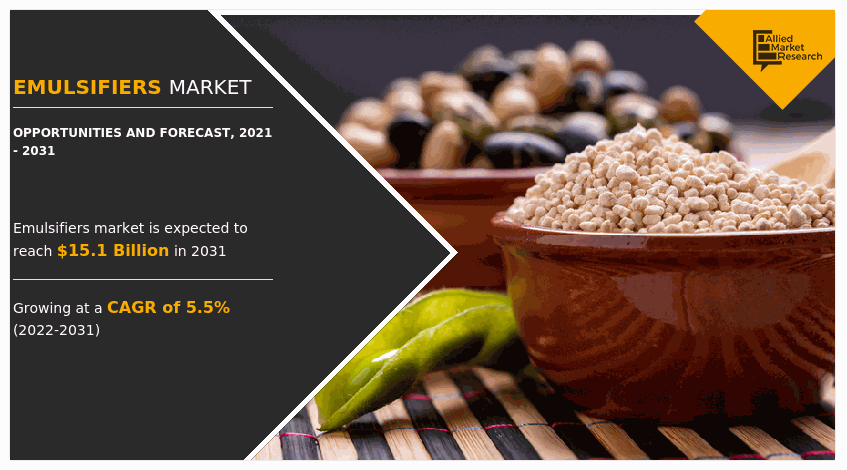 Emulsifier is a surface-active chemical that functions to keep the mixture of two immiscible liquids stable. Emulsifier molecules have hydrophilic and hydrophobic ends, with the former connecting with water and the latter bonding with air. Natural, synthetic, and semisynthetic emulsifiers are classed depending on their chemical structure. Owing of their ability to keep product texture for a longer amount of time, natural emulsifiers are increasingly being used in culinary items such as biscuits, extruded snacks, cakes, soft drinks, toffees, frozen desserts, bread, margarine, coffee whitener, and caramels.

With the evolution of technology, industrial businesses are adopting new sources of emulsifiers to improve product quality, boost efficiency, and minimize processing time. For decades, emulsion technology has been used in the food industry to produce a wide range of products such as homogenized milk, creams, dips, dressings, sauces, desserts, and toppings. Significant advances in emulsion science, on the other hand, have lately resulted in revolutionary approaches for improving food quality and usability. Silica particles, wheat protein microgels, pea protein microgels, and other new advancements in emulsion technologies are assisting producers to bind the chemicals effectively, lowering the time required to complete the process.  The introduction of such innovation is expected to fuel the emulsifiers market growth.

The production of emulsifiers is a complicated procedure that must adhere to the severe requirements imposed by the governments. National and international scientific expert bodies rigorously examine emulsifiers and food additives. The worldwide Joint FAO/WHO Expert Committee on Food Additives (JECFA), the European Food Safety Authority (EFSA), and state agencies are among the independent bodies. In Europe, the European Food Safety Authority (EFSA) is in charge of checking emulsifiers at each stage of manufacturing and has published rules on how much emulsifiers can be used in food & beverages. In addition, the Food and Drug Administration has recommended a list of emulsifiers that are acceptable for use within their respective constraints. Thus, the implantation of stringent government regulations on the use of emulsifiers has declined the development pace of the emulsifiers market.

The emulsifiers market is segmented into source, application, and region. On the basis of source, the market is categorized into the plant, animal, and synthetic. Depending on application, it is segregated into food & beverages, personal care & cosmetics, pharmaceuticals, and others. Region wise, it is analyzed across North America (the U.S., Canada, and Mexico), Europe (Germany, UK, France, Italy, Spain, and the rest of Europe), Asia-Pacific (China, India, Japan, Australia, South Korea, and rest of Asia-Pacific), and LAMEA (Brazil, Turkey, South Africa, Argentina, and Rest of LAMEA).

According to emulsifiers market trend, on the basis of source, the animal segment garnered a major share in the global market in 2021, and is expected to sustain its market share during the emulsifiers market forecast period. This is attributed to the fact that animal is the most common source from which emulsifiers are made as they cost less time period to extract and are easily available

Animal segment dominates the Emulsifiers in 2021, and is expected to retain its dominance throughout the forecast period.

By application, the food & beverages segment dominated the global market, and is estimated to register a CAGR of 4.4%. The others segment accounted for approximately 35% of the global emulsifiers market share in 2021, and is expected to sustain its share during the forecast period.

Food and Beverages segment dominates the Emulsifiers in 2021, and is expected to retain its dominance throughout the forecast period.

According to emulsifiers market analysis, region wise, North America dominated the global market in 2021, and is expected to be dominant during the forecast period. This is attributed to strong presence of food & beverages, cosmetics, pharmaceutical, and paints & oils companies in North America, which increases the demand for emulsifiers.

North America dominates the Emulsifiers in 2021, and is expected to retain its dominance throughout the forecast period.

According to the insights of the CXOs, the usage of semi-synthetic emulsifiers will increase in the next years, as they are both natural and synthetic. Phospholipids are semi-synthetic emulsifiers that are widely employed in the pharmaceutical business as wetting agents, emulsifiers, and builders or components of various lipid mesophases, including liposomes, micelles, mixed micelles, inverted micelles, and cubosomes. These functional qualities are used in a variety of pharmaceutical formulations, including suspensions, emulsions, solid dispersions, lipid nanoparticles, and drug/phospholipid complexes. In terms of their physiological significance, phospholipids exhibit very low toxicity profile and may be administered by any route, including injectable, oral, and topical.

Q1. What is the total market value of Emulsifiers report?

Q2. What is the CAGR of Emulsifiers Market?

Q3. How can I get sample report of Emulsifiers Market?

A. Raise the query and paste the link of the specific report and our sales executive will revert with the sample.

Q4. What would be forecast period in the Emulsifiers Market report?

A. The forecast period in the emulsifiers market report is from 2022 to 2031.

Q5. Which are the top companies in the Emulsifiers Market?

Q6. What are the segments of Emulsifiers Market?

A. The emulsifiers market report has 2 segments. The segments are source, and application.

Q7. What are the market values / growth % of emerging countries Market?

A. The emerging countries in the emulsifiers market are likely to grow at a CAGR of more than 9% from 2022 to 2031.

Q8. What is the impact of Post COVID-19 scenario in Emulsifiers Market?

A. Post COVID-19, the ease of lockdown and successful vaccination drive had improved the supply chain for emulsifiers and with the increasing population in Asia-Pacific region the demand for food, beverages and cosmetic products by the consumers are increasing. The increase in demand is fueling the requirement for emulsifiers.

Q9. By Region, which segment will dominate the market by the end of 2031?

A. North America will dominate the emulsifiers market by the end of 2031.