by Type (Lager, Ale, Stout & Porter, Malt, and Others), Category (Economic, Premium, and Super Premium), Packaging (Glass, PET Bottle, Metal Can, and Others), and Production (Macro-brewery, Micro-brewery, Craft Brewery, and Others): Opportunity Analysis and Industry Forecast, 2018-2025

Get detailed COVID-19 impact analysis on the Europe Beer Market

The Europe beer market was valued at $138,649 million in 2017, and is projected to reach $159,687 million by 2025, registering a CAGR of 1.8% from 2018 to 2025. Beer is one of the most popular alcoholic beverages and is widely consumed across the globe. Europe has always been considered as an attractive tourist destination owing to multiple cultures, influences, and languages.  Besides this, one of the greatest aspects of this old continent is, people here enjoy socializing. Some of the leading players around the world are Heineken N.V. and Anheuser-Busch InBev. Each country in the region has their national beer but branded beer such as Guinness (Dublin), Heineken (Amsterdam) and Tuborg (Copenhagen) are some of the most exciting ones that are popular in the region. Rise in disposable income, changes in lifestyle, and wide acceptance of beer as a refreshment beverage drive the Europe beer market growth. 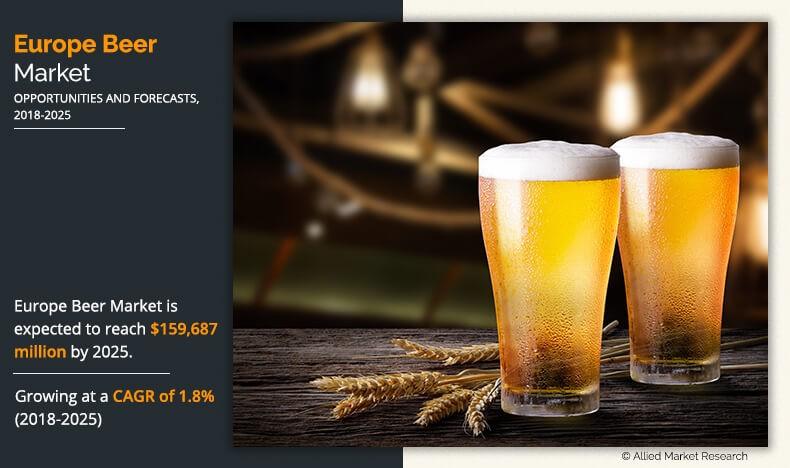 The Europe beer market is segmented into type, category, packaging, production, and region. Based on type, the market is divided into lager, ale, stout & porter, malt, and others. According to category, it is classified into Economic , premium, and super premium. Based on packaging, it is divided into glass, PET bottle, metal can, and others. Based on production, the Europe beer market segmentation includes macro-brewery, micro-brewery, craft brewery, and others. By country, it is analyzed across Germany, the UK, France, Italy, Spain, Russia and rest of Europe. The ongoing changes in lifestyle worldwide make way for numerous Europe beer market opportunities. This definitely brings in some good news for prominent market players across business verticals. Increase in the youth population and rise in number of female drinkers drive the Europe beer market growth. In addition, surge in the number of restaurants and bars has fueled the consumption of these beverages, as people increasingly prefer on premise drinking rather than off premise drinking. 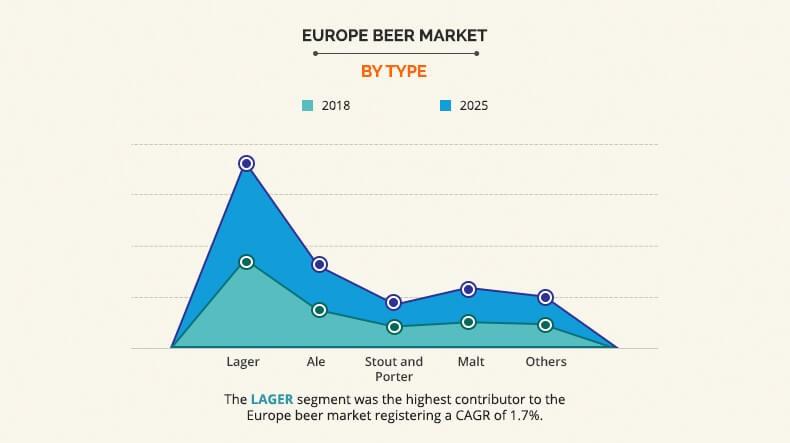 By type, the lager segment was the highest contributor and accounted for about 44% share of the total Europe beer market. Acceptance rate of lager beer by consumers is high over other types of beer. Moreover, majority of the companies dealing in the beer market prefer manufacturing lager as it offers high returns on investment. However, the malt segment is anticipated to witness high growth during the forecast period. 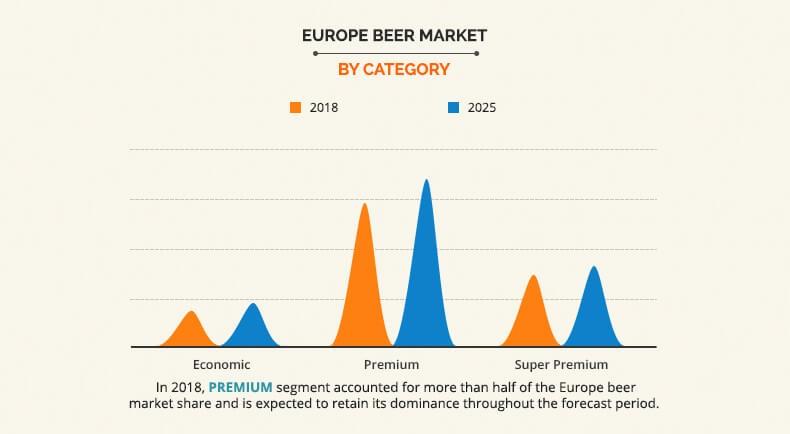 Based on category, the premium segment accounted for more than half share of the Europe beer market in 2018 and is expected to retain its dominance throughout the Europe beer market forecast period. Consumers are increasingly opting to experiment with locally produced premium and international beer varieties. Premium and super-premium beers are continuing to attract greater attention from consumers and proving to be a crucial competitor to the more traditional beer brands. Growth of the premium segment in the European market remains organic and is expected to grow at the same rates over the forecast period. 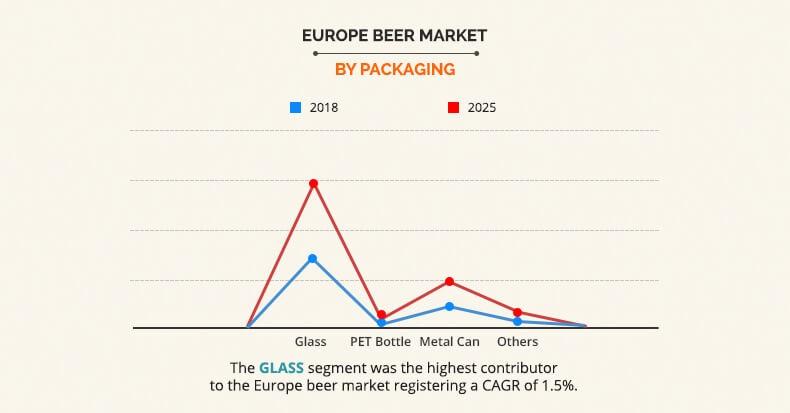 Based on packaging, the glass segment was the highest contributor to the Europe beer market registering a CAGR of 1.5%. Glass is the most classic form of packaging beer that keeps it cool for a longer time than the other available packaging choices. It preserves beer well, with many beer drinkers favoring the aesthetically pleasing glass bottle over a can. Consumer’s primary choice for reliable, healthy, sustainable, and premium beer is expected to continue the rise in demand for glass packaging. Owing to this, many manufacturers have embraced the artistry of branding by creating beautiful designs for their labels. 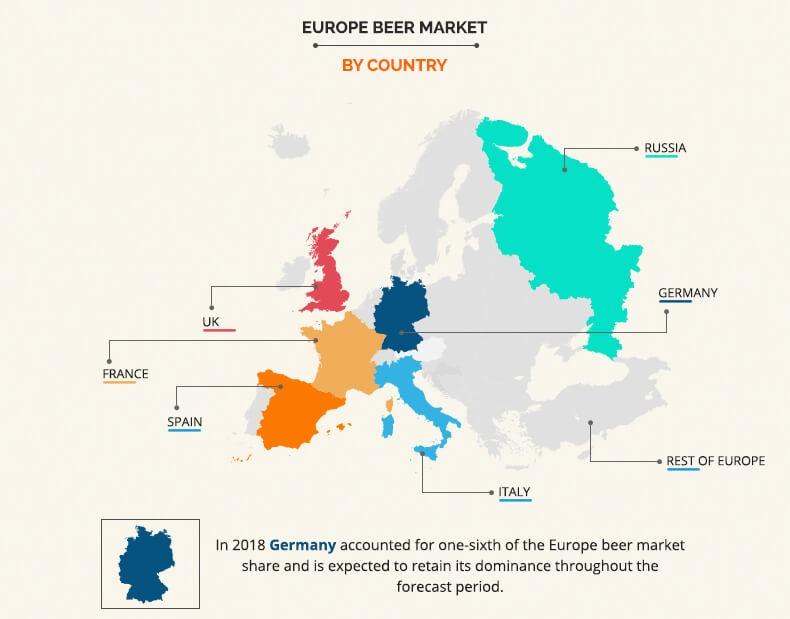 Based on country, Germany accounted for one-sixth of the Europe beer market share in 2018 and is expected to retain its dominance throughout the forecast period. Germany is the most important beer market in Europe, followed by the UK, Russia, and France. German consumers have always enjoyed products that originate from their own region or country, a trend that is also visible in beer. Health and wellness trend has been the most common driver for the German beer market. However, the UK is anticipated to witness high growth during the forecast period.

The Europe beer market is anticipated to be one of the most attractive and largest beer market by 2025 globally. Higher incomes, changing lifestyles and increasing popularity of beer in Europe, make the continent the second largest consumer of beer. Apart from this, other major driving forces responsible for its growth include availability of premium and flavored beers, relaxation of rules and regulations, and rise in demand for non or low alcoholic beer. UK and Germany are anticipated to be the developing markets for Europe beer market. The mentioned countries are anticipated to witness a rise in beer consumer base and increased production of beers with rich flavor and aroma, compared to other regions.

Structure of the Europe beer market is very diverse. Players of different sizes with a varied range of product offerings operate in it. This also makes the market for beer in Europe aggressive. To surge ahead of their rivals in such an environment, vendors are inculcating aggressive pricing strategies and implementing new and advanced quality control operations. They are also leveraging smart distribution strategies and building brand review to promote product sales. Rapid change in demand for consumers has driven the market players to adopt market strategies such as collaborations and acquisitions, to sustain in the market. For instance, Heineken introduced non-alcoholic beer Heineken 0.0 in 2017.