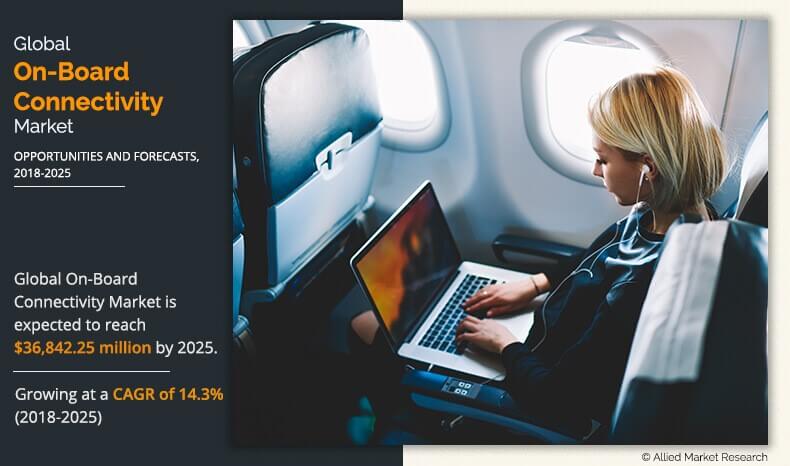 The entertainment segment dominated the on-board connectivity market share in 2017 and is expected to continue this trend during the forecast period, due to increase in IT investment in aviation, maritime, and railways by government organizations and several other companies. In addition, increase in demand for live streaming videos and rise in use of social media apps are also the major factors driving the growth of this segment. 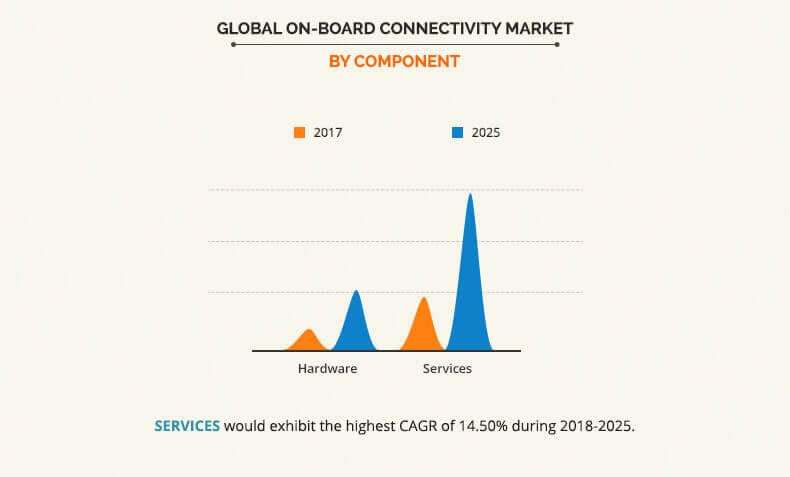 The ground to air segment dominated the overall on-board connectivity market in 2017 and is expected to remain dominant during the forecast period, due to significant growth and adoption of wireless communication technologies such as 4G LTE, and expected launch of 5G are the major factors fueling the market growth. On the contrary, the satellite segment is also expected to grow at a rapid pace throughout the forecast years. 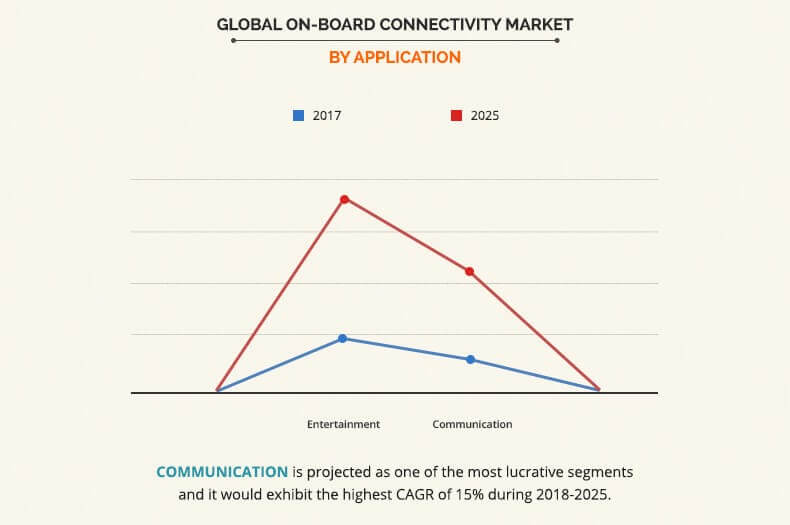 North America dominated the overall market in 2017, as the U.S. was a major contributor to the growth of the North America on-board connectivity market. The dominance of this region is primarily due to the presence of major market players in this region. In addition, availability of strong on ground as well as satellite connectivity is also the major factor fueling the market growth in this region. However, Asia-Pacific has grown significantly in the last few years and is expected to attain the highest CAGR during the forecast period owing to rise in communication services in countries such as Japan, India, and China. Moreover, according to a global Inflight Connectivity Survey by Inmarsat in 2017, the passengers in the Asia-Pacific region have highest expectations of connectivity. For instance, 91% people are ready to pay for Wi-Fi on long-distance flights, which is expected to provide major opportunities for the market growth. 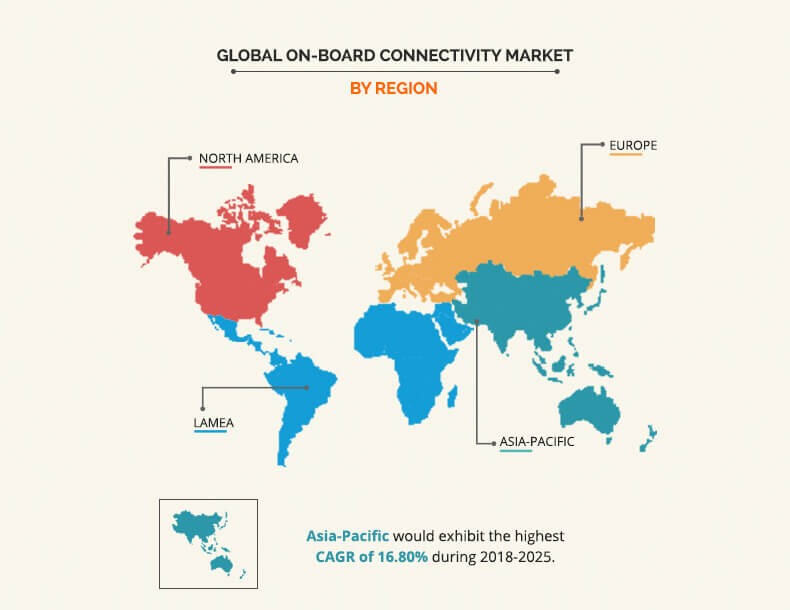 The report focuses on the growth prospects, restraints, and trends of the global on-board connectivity market. The study provides Porter’s five forces analysis of the industry to understand the impact of various factors such as bargaining power of suppliers, competitive intensity of competitors, threat of new entrants, threat of substitutes, and bargaining power of buyers on the on-board connectivity market growth. 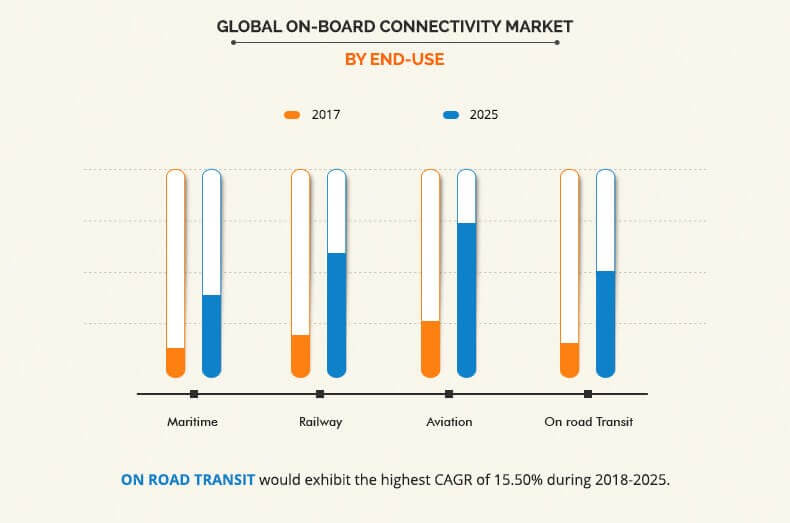 Increase in IT expenditure in the aviation, railway and maritime industry

The benefits of Internet of Things are majorly being experienced in consumer domain such as transport, which comprises aviation, maritime, railway and other road transits, which in turn drive the growth of the on-board connectivity market. Moreover, integrating on-board connectivity devices into airplanes, railways, and ships system enables additional functionality. Also, it allows service providers to keep the passengers entertained during the course of their journey, which in turn enables to attract more passengers. This is the major factor that boosts the growth of the market. For instance, the number of connected cars is predicted to reach $220 million by 2020. Also, according to a survey by Inmarsat in 2015, the demand for in-flight broadband services among Europe’s aviation passengers is on the rise. For instance, the survey stated that if given the opportunity 80% people are estimated to use in-flight Wi-Fi and 67% passengers will willingly pay for the service, which is expected to provide major opportunities for the market growth. Moreover, growth in usage of social media and increase in trend of continuously being connected with friends and families through various social media apps are the major factors expected to provide major opportunities for the growth of the on-board connectivity market.

Rise in disposable income of consumers

Increase in penetration of smartphones is the major reason for people to become more technologically active and thus, willingly spend more on related services. In addition, rise in disposable income of the people is also the major factor that triggers such technological advancements. For example, disposable income of people in the most populous countries such as India and China has increased over the past few years, which in turn has fueled their expenditure on various factors such as, luxury, food, technologies, and others. Moreover, increase in influence of social media on daily life of people is also the major factor that is indirectly affecting their income. Moreover, people are willing to spend more for staying connected with their family and friends while travelling. For instance, according to Inmarsat’s Global Inflight Connectivity Survey, 61% people said high-quality inflight Wi-Fi is more important to them than onboard entertainment and 45% people were willing to pay for the on-board Wi-Fi service.

Growth in number of airline passengers

Increase in number of airline passengers worldwide is the major factor driving the on-board connectivity market. The reason behind this growth is mainly attributed to tremendous growth in the developing Asian markets, as the new low-cost carriers are providing air fares at reasonable costs, which are attracting the middle-class people in this region. Moreover, increase in infrastructural investment by governments in this region is also playing a vital role in rise in the number of passengers. For instance, according to a report by the International Air Transport Association (IATA) in 2017, the number of passengers in Asia-Pacific increased by 36.3% of market share and 1.5 billion passengers annually. Following  Asia-Pacific, Europe accounted for 26.3% market share including 1.1 billion passengers yearly. North America experienced 941.8 million passengers per annum and comprised 23% market share. Also, the number of passengers in Latin America region observed 7% growth with 286.1 million passengers annually. Thus, all these factors are contributing toward the growth of the market and are expected to provide major opportunities throughout the forecast years.

The on-board connectivity services include mobile phone internet access, wireless internet access, and other data sharing services. In addition, it allows passengers to send and receive texts, emails, and other multi-media messages through their smartphones, tablets, and laptops while travelling by airplane, ships or even high-speed trains. Furthermore, technological advancements and growth in demand for Wi-Fi connectivity are generating major opportunities for the on-board connectivity market, which is expected to increase its demand during the forecast period. Moreover, many airlines, trains, ships, and public transportation buses have started offering on-board connectivity to their customers, which in turn boosts the growth in number of passengers worldwide. For instance, the UK government has started providing on-board Wi-Fi connectivity in their trains. In addition, Turkish airlines with Panasonic Avionics Corporation has deployed on-board connectivity in their 50 wide-bodied aircrafts, for inflight entertainment and connectivity. Moreover, Gogo, an in-flight Wi-Fi provider company, is providing 2Ku service promises to deliver up to 70 Mbps speed, which is expected to provide major opportunities for the market growth in upcoming years. Also, according to Gogo, 55% aircrafts across the globe are anticipated to be equipped with inflight connectivity by 2024. Furthermore, to provide better inflight connectivity to the passengers, Deutsche Telekom and Inmarsat launched a hybrid satellite and air to ground (ATG) solution in 2017.

The global on-board connectivity market is dominated by the key players such as ALE International, Bombardier Inc., Global Eagle Entertainment Inc., Gogo Inc., Honeywell International Inc., Inmarsat Plc., Panasonic Corporation, Rockwell Collins, Thales Group, Viasat, Inc. and others. The key players have adopted various growth strategies to enhance and develop their product portfolio, strengthen their on-board connectivity market share, and to increase their market penetration. For instance, in December 2018, Ericsson and Panasonic Avionics Corporation teamed up to provide inflight 5G connectivity services. Furthermore, Panasonic will be utilizing Ericsson’s Core Network as a Service solution to provide messaging and voice communication services to its millions of airline passengers across the globe.