The tolling system is an automated mechanism, which helps reduce the delay on toll bridges, toll roads, and toll tunnels without human intervention for toll receivers and payers. It can electronically charge a toll to an established customer account through real-time tracking and monitoring system. The latest innovation in tolling system is the electronic toll collection (ETC) that allows vehicles to pass through a toll facility without stopping at the toll center. This tolling system uses technologies such as radio-frequency identification (RFID), dedicated short-range communication (DSRC), infrared, global navigation satellite system (GNSS)/global positioning system (GPS), and video analytics, for its operation. 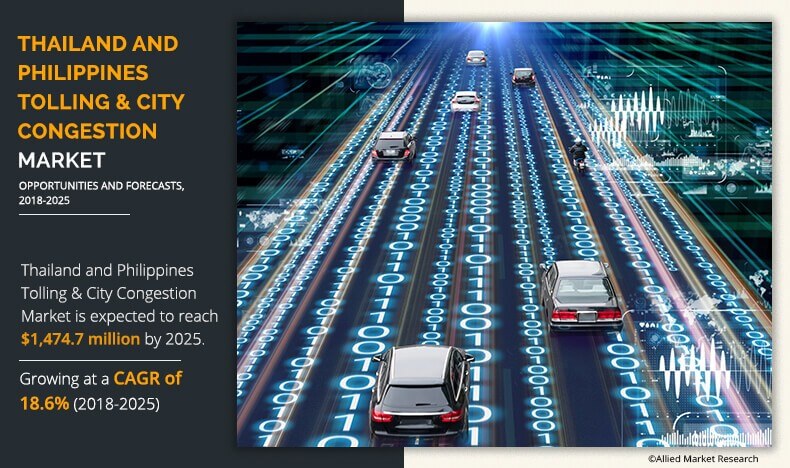 Factors such as rise in demand for efficient traffic management solutions, increase in number of vehicles, and reduction in environmental pollution are major factors driving the adoption of tolling & city congestion systems. 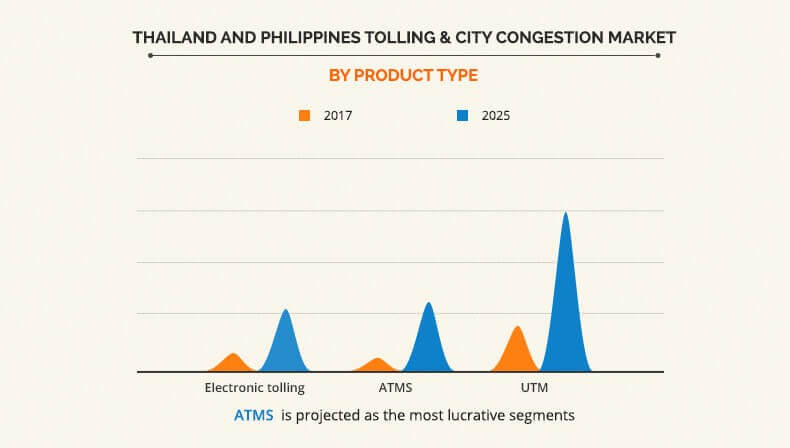 However, high capital investment for transportation & tolling system, large database requirement for road & tolling network, and low acceptance ratio are the major restraining factors for this market. Furthermore, rise in investments in the idea of smart cities and innovation of smart signal offer lucrative opportunities for the Thailand and Philippines tolling & city congestion market. 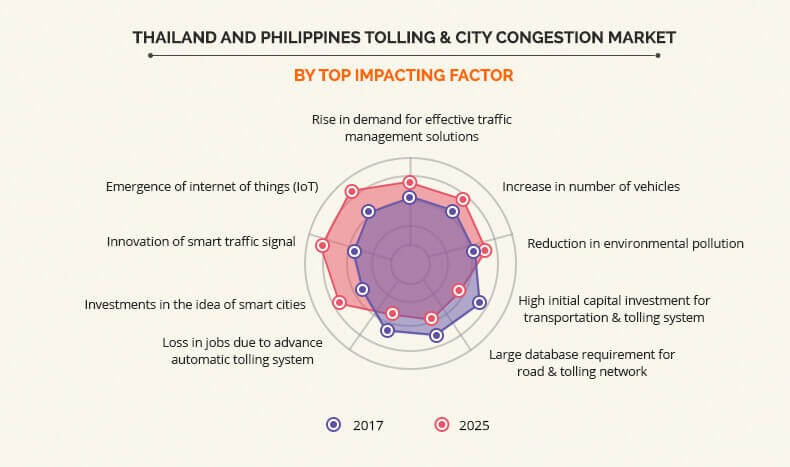 The key factors that drive the growth of the Thailand and Philippines tolling & city congestion industry are rise in demand for effective traffic management solutions, increase in number of vehicles, and reduction in environmental pollution. However, high initial capital investment for transportation & tolling system, large database requirement for road & tolling network and loss in jobs owing to the advanced automatic tolling system hamper the growth of the market to a certain extent. The market witnessed significant growth owing to investments in the idea of smart cities, innovation of smart traffic signal, and emergence of internet of things (IoT). Each of these factors is anticipated to have a definite impact on the Thailand and Philippines tolling & city congestion market during the forecast period.

Increase in number of vehicles leads to traffic congestion, if conventional traffic management systems are used. For instance, Los Angeles is the most congested city in the world where citizens spend on an average 102 hours in traffic during peak hours, which is followed by San Francisco, Moscow, and others. Moreover, in Asia-Pacific region, the major cities that face high traffic congestion include Dhaka, New Delhi, and Mumbai. Thus, the demand for smart transportation network is on the rise, which is expected to help in reducing traffic congestion and thus, enhance the safety, sustainability, and efficiency of the transportation network. The number of vehicles on the road is increasing at a rapid rate that creates traffic congestions. Consequently, most of the consumers are now availing smart transportation options that can easily direct them toward the road that is less congested.

Increase in number of vehicles

In many developed or developing countries, rise in disposable incomes results in a rapid increase in the sale of vehicles. This increase in adoption of vehicles leads to problems such as car parking space issue along with traffic snarls and congestion. For instance, the problem related to traffic in Amsterdam was solved by implementing TrafficLink SCM system that is connected to the traffic system of the national government. Furthermore, TrafficLinks SCM system resolved the conflict between North Holland and the national government by optimizing efficient traffic flow. It was achieved by initializing a single screen that allows both the parties to manage or monitor traffic in their respective region. The implementation of such an intelligent traffic management system has reduced the problem of traffic congestion in the city. The joint monitoring of vehicles & traffic by North Holland and the national government is creating significant demand for the tolling and city congestion market.

Smart transportation is in high demand owing to its advantages such as time saving, cost-efficient, highly secure, and fast speed over the traditional transportation system. Developed countries such as the U.S. and the UK can afford the capital investment required for smart transportation. However, it is deemed expensive in developing countries such as Philippines, Pakistan, and others, due to lack of information and awareness about the technology in these countries. Thus, in developing as well as underdeveloped countries, high capital investment is a major factor that hampers the growth of the tolling and city congestion market.

Investments in the idea of smart cities

The development of smart cities and connected transport infrastructure is supported by the governments of several countries owing to rapid growth of economies and rapid adoption of advanced technologies worldwide. Countries such as Australia, Japan, China, and those from North America that include Canada, the U.S., and Mexico, have initiated the installation of digital infrastructure to facilitate connectivity between vehicles and infrastructure to gather vital information, to reduce traffic congestion, and make roads safer.

Thailand and Philippines tolling & city congestion market holds high potential for the transportation industry. The current business scenario witnessed an increase in the demand for effective traffic management solutions, particularly in the developing regions, such as Thailand, Philippines, and others. The key players operating in the industry have adopted various techniques to provide advanced and innovative product offerings to the customers.

The Thailand and Philippines tolling & city congestion market is driven by rise in demand for efficient traffic management solutions, increase in the number of vehicles, and reduction in environmental pollution.

However, high capital investment for transportation & tolling system, large database required for road & tolling network, and low acceptance ratio are the major restraining factors for this market. Furthermore, investments in the idea of smart cities and innovation of smart signal are creating lucrative opportunities for Thailand and Philippines tolling & city congestion market