Get detailed COVID-19 impact analysis on the Egg Protein Market

The egg protein market size was valued at $26.6 billion in 2018, and is estimated to reach $38.9 billion by 2026, registering a CAGR of 4.8% from 2019 to 2026. In 2018, the egg white protein segment accounted for more than half of the total egg protein market share. Egg proteins are multifunctional ingredients, which are used in the preparation of wide range of food products. These products exhibit many properties and bioactivities, which are helpful in food processing. In addition, egg protein function as an emulsifier, foaming agent, thickening agent, texturizer, and gelling agent, thus increasing its application the food & beverages industry. Moreover, egg protein ingredients applicable across in multiple other industries, including nutrition, animal feed, and cosmetics. 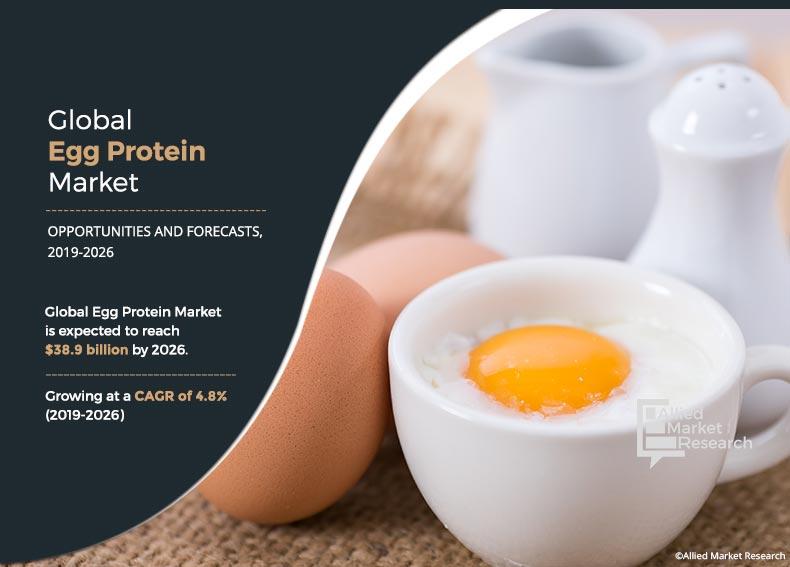 Owing to increase in awareness about health, consumers are shifting their focus toward healthy diets and have been increasing their protein intake to get extra nutrition from these protein supplements, which fuels the market growth for protein supplements. Egg white protein powders are one of the most popular and widely accepted protein supplements among consumers, which is expected to drive the market for egg proteins in the near future. In addition, egg ingredient manufacturers have been engaged in R&D activities to enhance the functions and performance of egg protein ingredients. This is anticipated to offer lucrative growth opportunities for manufacturers in the market. Egg protein ingredients are widely used in food preparation such as bakery, confectionery, and snacks.

The egg protein market is segmented into type, application, form, and region. By type, the market is categorized into egg white protein, whole egg protein, and egg yolk protein. In terms of application, it is divided into food & beverages, nutrition, personal care & cosmetics, feed, and others. Depending on form, it is bifurcated into solid and liquid. Region wise, it is analyzed across North America (U.S., Canada, and Mexico), Europe (Germany, France, UK, Italy, Spain, and rest of Europe), Asia-Pacific (China, Japan, Australia, India, and rest of Asia-Pacific), and LAMEA (the Middle East, Latin America, and Africa).

The Egg yolk protein segment would witness the fastest growth, registering a CAGR of 5.9% during the forecast.

On the basis of type, the egg white powder segment accounted for the maximum share in the global market in 2018. Egg white protein powder has been the one of the most preferred choice of protein among the consumers, due to increase in demand for nutrition products coupled with surge in need for protein-rich foods. Owing to the growing demand for egg yolk protein powder from the consumers wanting to gain weight, the market for egg yolk powder is likely to grow at the highest CAGR during the forecast period.

Nutrition segment would witness the fastest growth, registering a CAGR of 5.7% during the forecast period.

Liquid segment would witness the faster growth, registering a CAGR of 5.8% during the forecast period.

On the basis of form, the powder segment held a higher share in the global market in 2018. Owing to the longer shelf life and better handling properties, powder form of egg protein ingredients is most preferred in wide range of application such as nutrition, food & beverage, feed, and personal care. However, the liquid segment is expected to account for higher growth rate, owing to rise in application of liquid egg proteins in various food preparations.

Region wise, Europe was the prominent market in 2018, which accounted for the maximum share in the egg protein market. This is attributed to the high consumption of egg protein products in Germany, France, Italy, Spain, and the UK. Consumers in the region are attracted by egg protein products with new flavors and higher nutritional value, which contributes toward the growth of the market in the region. However, Asia-Pacific is expected to witness a highest CAGR, owing to development of the food & beverage industry and increase in awareness about nutritional supplements among consumers.

Rise in demand for innovative functional properties and new applications of egg proteins products is among the major factors that boosts egg proteins consumption. A huge demand for egg white proteins in protein supplements has been noted during the recent past, which is anticipated to continue during the forecast period. Growing Surge in inclination of the food and & beverage manufacturers toward functional ingredient having high nutritional content and better enhanced performance are is one of the main factors that drives the market growth. The demand for egg protein ingredients in innovative food and other industrial applications have led the ingredient manufacturers to invest more in R&D activities to provide egg protein ingredients with better superior functionalities for preparing or processing of innovative food and & beverage products in the market.

As per the CXOs, Asia-Pacific is offering incremental growth opportunities for egg protein ingredients, and hence the market in the region is likely anticipated to grow at the highest CAGR for the period under consideration. The market is consolidated in nature, and players such as Cargill, Kewpie Corporation, Rose Acre Farms, Rembrandt foods, Bouwhuis Enthoven Wulro BV, Igreca, Sanovo Egg Group, Interovo Egg Group BV, and Dalian Hanovo Foods Co., Ltd accounted for significant share in the global egg proteins market. CXOs further added that Owing to the increase in demand for functional food and nutritional supplements the egg proteins market is expected to grow at significant rate during the forecast period, owing to increase in demand for functional food and nutritional supplements.

Q1. What is the growth rate of the Global Egg Protein Market during the forecast period?

A. The growth rate of the Global Egg Protein Market is 4.8% during the forecast period

Q3. What are the leading manufacturing companies in the Global Egg Protein Market?

Q4. How the major current trends will shape the market in the future?

A. Major trends such as the demand for protein supplements and the consumer awareness regarding healthy diets are likely to propel the growth of egg protein market in the future.

Q5. What are the driving factors and opportunities in the Global Egg Protein Market?

A. The factors such as consumer awareness about healthy diet and Increase in demand for egg proteins as nutritional and functional ingredients are driving the market for egg proteins and untapped markets and product innovations offer opportunities for the market growth.

Q6. What are the challenges faced in the Global Egg Protein Market?

A. Surge in the demand for plant based protein ingredients is likely to pose challenges to the global egg protein market in the future.

Q7. Why are some of the segments flourishing at the highest growth rate while others experience a steady growth?

A. Segments such as nutrition are growing at significant rate owing to the growing consumer inclination towards protein based nutritional supplements coupled with rising health consciousness among consumers.

Q8. What are the conclusions of the Global Egg Protein Market report?

A. Owing to increasing demand for egg protein from the food & beverage and nutrition sector, the egg protein market is likely to experience significant growth in the near future.