Spread of COVID-19 has already negatively influenced the global train market, which impacted growth of the fuel cell train market, globally. For instance, major rolling stock manufacturers such Stadler Rail AG and Alstom have announced suspension of production, owing to decline in demand, supply chain bottlenecks, and to protect safety of their employees in France, Germany, Italy, the U.S., and Spain during the COVID-19 pandemic. The COVID-19 outbreak forced governments across the globe to implement stringent lockdown and ban import–export of essential raw material items for most of 2020, and few months in 2021. This led to sudden decline in demand for passenger rail vehicles, further impacting growth of the rolling stock industry. The COVID-19 pandemic not only affected operations of the rolling stock industry, but economic crisis also led to reduction in expenditure on next-generation technologies, for instance, hydrogen trains. The demand for rolling stock experienced recovery in 2021 as operations of manufacturing companies and factories resumed, initiating continuation of railway projects around the world. Leading market players are taking various measures to deal with the negative effects of the outbreak of COVID-19. For instance, CRRC (China) is using the current market scenario to further strengthen its position by making strategic future-oriented investments and following a strict cost management program Government authorities and operators are expected to accelerate and resume metro projects and expansion of the rail network after pandemic, which is anticipated to positively affect growth of the rolling stock industry in post pandemic situation, which is expected fuel development of the hydrogen fuel cell train market 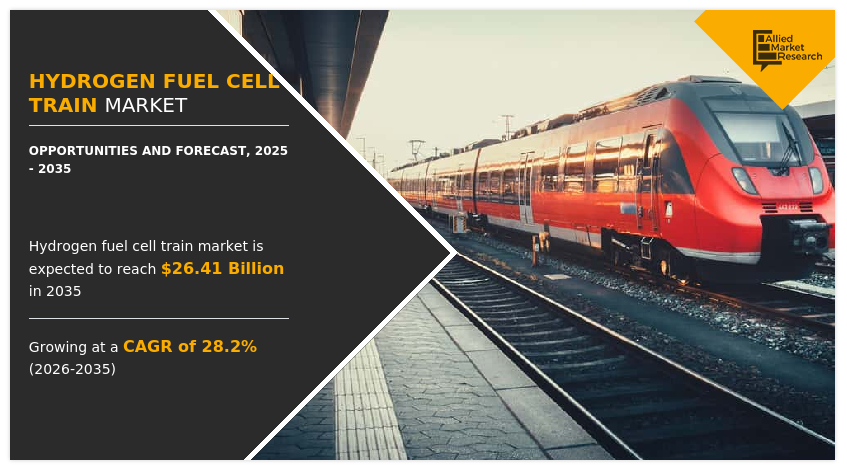 Hydrogen fuel cell train or hydrogen powered trains uses hydrogen as a power source for propulsion and auxiliary application. Research on hydrogen as a potential fuel to power zero-emission trains has been on the rise in recent years. The rail sector is working to develop technologies to tackle challenges associated with hydrogen storage infrastructure and public perceptions for safety and cost.

Passenger Rail is projected as the most lucrative segment

Developing countries such as India and China are focused toward development of their railway infrastructure by allocating higher budget. For instance, India allocated a budget of around $15.06 billion (â‚¹1.10 lakh crore) for railways, with total capital expenditure outlay of $30.80 billion (â‚¹2.15 lakh crore) for the financial year 2021-2022, which highlights increase of 33% in total capital expenditure for 2021-22 over $22.4 billion (â‚¹1.61 lakh crore) for 2020-21. Moreover, in May 2022 Indian railways awarded a contract of around $8.87 (Rs 70 crore) to Medha Servo Drives to develop hydrogen fuel cell-based technology that can be used to upgrade existing diesel-powered trains. Similarly, various countries across the globe are continuously increasing their rail budget to deploy latest technologies and improve their infrastructure. For instance, the government of UK invested over $6.28 billion (£5.3 billion) in new & enhanced rail infrastructure and rolling stock from 2019 to 2020. Investments in the railway consist of enhancements to existing rail infrastructure and private investments, largely in new rolling stock. Thus, surge in budget allocation acts as a key factor that drives growth of the global hydrogen fuel cell train market.

Hydrogen fuel cell pack is projected as the most lucrative segment

Rise in concerns of environment degradation and depletion of natural resources, have led to launch of various technologies to support eco-friendly concept to sustain the environment. Moreover, increase in awareness regarding consequences of air pollution and rise in levels of traffic & greenhouse gas emissions drive adoption of hydrogen fuel cell vehicles. In addition, to support the ever-rising greenhouse gases (GHG) emission, a fuel must be found to replace petroleum-based fuel. New fuels should be accessible at a global level without causing any hazard of control by a cartel (for instance, Organization of the Petroleum Exporting Countries (OPEC)) and must meet the fundamental requirements of safety performance, environment, and economic considerations. Hydrogen has the potential to substitute the currently used fuel. Using hydrogen, as compared with traditional fuel (petrol and diesel) and sustainable fuels (advanced biofuel types and flex fuel used in different vehicles) reduces GHG emissions. Hydrogen as an energy carrier for usage in a vehicle has some exceptional qualities such as minimum pollution and lightweight, global availability, and safety, thus making it a suitable fuel. In comparison with li-ion batteries, hydrogen has a greater energy density, both in terms of gravimetric and volumetric measures. Furthermore, hydrogen is expected to be used in several industries, which could quicken advancements of fuel cells and storage systems, push downstream infrastructure, and drive down the supply chain costs. Hence, all such factors are expected to propel the hydrogen fuel cell-based train market growth.

Increase in preference toward railway transport is leading to a high demand for these rolling stocks and related infrastructure in recent years. In addition, rise in urban traffic congestion and problems related to it are the major reasons for shift in rapid urban transit networks such as metro, monorails, and trams. In addition, development in rail infrastructure, inexpensive fares, environment friendly, and faster mode of transport are the factors that increase penetration in the global hydrogen fuel cell train industry. However, hydrogen fuel cell rolling stock and supporting infrastructure is highly capital-intensive and necessitates significant financial support from local and governments as the cost of trains is significantly high. Moreover, hydrogen fuel cell stock needs to be periodically overhauled to ensure its reliability. This includes maintenance of electrical, mechanical, and hydraulic components of vehicles. However, regular maintenance and overhaul of hydrogen fuel cell trains can be highly expensive. This indicates requirement of high capital to build as well as to maintain the train network, which is expected to hamper the market growth.

Q1. What is the estimated industry size of hydrogen fuel cell train?

Q2. What is the leading application of hydrogen fuel cell train market?

A. Passenger Train is the leading application of Hydrogen Fuel Cell Train Market

Q3. Which is the largest regional market for hydrogen fuel cell train?

A. Europe is the largest regional market for Hydrogen Fuel Cell Train

Q4. What are the upcoming trends of hydrogen fuel cell train market in the world?

A. Increase in R&D activities related to hydrogen fuel cell technology, and increase in demand for trains for passenger transportation are expected to drive the Hydrogen Fuel Cell Train Market

Q5. Which are the top companies to hold the market share in hydrogen fuel cell train?

Q6. How can I get sample report/company profiles of hydrogen fuel cell train market?

A. The report sample for global Hydrogen Fuel Cell Train Market report can be obtained on demand from the website.