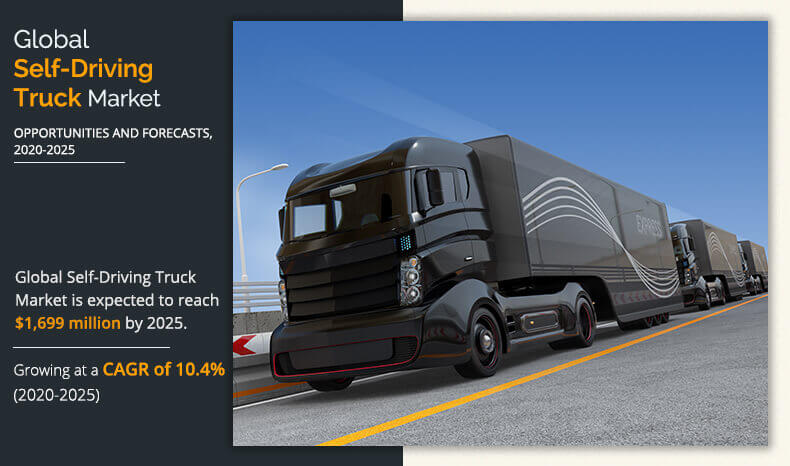 Government of various states are allowing the testing of the autonomous trucks on the public roads which in turn is anticipated to boost the growth of self-driving truck market. For instance, On April 2019, a rule proposed by state’s Department of Motor Vehicles was announced by the government of California, which will allow the testing of self-driving trucks on the public roads. According to the rule trucks weighing less than 10,001 pounds which are Class 1 and Class 2 trucks, are allowed for testing. All the other vehicle from Class 3 to Class 8 such as semi-trucks, buses, heavy-duty construction vehicles, and others are not included under this permitting system.

In addition, leading truck manufacturer are acquiring robotics companies for developing technologies for autonomous trucks. For instance, Daimler, a multinational automaker acquired an American autonomous vehicle company, Torc Robotics to incorporate the autonomous technology in the trucks. Torc robotics has partnership with Caterpillar, an American manufacturer and distributor of engines, machinery, and others for development of self-driving technology for mining and agricultural applications.

Level one is the first step towards automated driving. This driver assistance level signifies that most of the functions are controlled by the automated assistance system automatically such as steering, acceleration, and brakes. Furthermore, human drivers perform all the remaining aspects of the dynamic driving task, and have full responsibility to monitor the environment and take over the assistance system when required. Moreover, level one automation offers vehicle-to-vehicle communication software, which allows the truck to follow each other at extremely short distances with distance up to 20–50 feet.

Level two automation allows the system software to handle steering, brakes, or acceleration. Furthermore, driver remains responsible for watching traffic, changing lanes, and exiting freeways & taking over the vehicle when the system prompts. Moreover, driver is disengaged from physically operating the vehicle, which results in elimination of vehicle crashes due to human errors.

Level three vehicle has certain modes, which take over the driving responsibilities under required conditions. This level controls the acceleration, brakes, and steering for the automated vehicle through system software. Furthermore, the vehicle actively monitors the environment using sensors such as LiDAR. 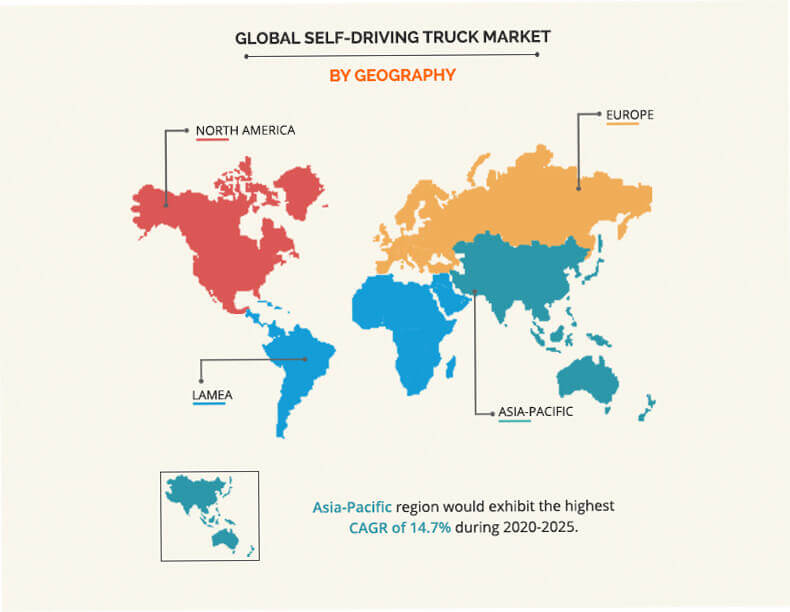 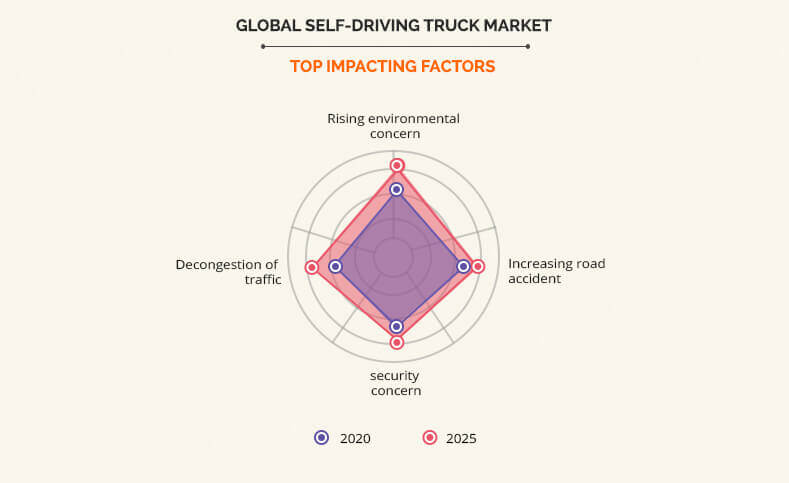 Increase in number of road accidents

Various technologies such as self-driving trucks are being introduced in the market that support the eco-friendly concept to sustain the environment, owing to rise in concerns of environment degradation and depletion of natural resources. Moreover, increase in awareness towards the consequences of air pollution and rise in traffic congestion drive the adoption of self-driven trucks, as they are fuel efficient and use significantly less gas & energy while driving as compared to conventional vehicles.

Job opportunities and slow transportation have led to surge in migration to cities, which has resulted in significant increase in population. In addition, to reach a location from the other is tedious, owing to heavy traffic. Thus, the abovementioned factors are expected to boost the demand for self-driven truck market, which cuts down the travel time, as it analyzes less populated and congested roads. In addition, this truck eliminates human errors such as high speed, distraction, and others and incompetence that often create traffic jam. Moreover, the self-driving technology possesses the ability to calculate the time of approaching traffic light, which allows it to not completely stop, instead slowdown, thereby facilitating traffic decongestion. Thus, increase in congestion due to consistently rising population is anticipated to provide potential opportunities for the self-driving truck market expansion.

The conventional vehicles are usually a combination of expensive, slow, and environmentally harmful factors. Road travel is particularly problematic, owing to emission of hazardous air pollutants. As the environmental impact of energy consumption continues to worsen, mass transit is anticipated to be crucial in the years to come, which creates the demand for technology such as self-driving truck. Rise in environmental concern majorly drives the growth of the self-driving truck market. Moreover, factors such as reduced wind drag, less road accident, decongestion of traffic and others also fuel the market growth.

Q1. What is the impact of Post COVID-19 scenario in self-driving truck industry?

A. Almost every significant automaker producing autonomous vehicle in U.S. ended up testing the AVs with a target to contain the spread of COVID-19, which in turn will help the growth of self-driving truck market.